It’s Tuesday 3rd May and I have the ASW19 to myself for the day.

It’s sunny and blue with not much in the way of clouds visible from the ground, however, other gliders are in the air and reporting good lift. What could I do?

LET’S GO TO LOCHABER! was the answer and perhaps, just perhaps, if I’m lucky ..The Ben.

I got off to a great start. A quick sniff around off a 2000ft launch gave me my first thermal over the Bears Paw. That gave me 5500ft and a great launch pad for the flight. The view down track was daunting with Ben Nevis on the horizon, however, nothing ventured, nothing gained, so I set off.

There were cloud caps ahead. It looked as though the into sun slopes were producing thermals so I stuck to the right hand side of Loch Laggan and made my way west. Those slopes proved reliable sources of lift and led me towards Laggan Dam.

Lochaber was blue as I continued west to Glen Spean and then took some time considering what to do next. While mulling things over I was joined by Sierra Romeo who flew west towards Spean Bridge, returning a few minutes later …much lower. With that strategy proving no good I had to come up with another plan and thought that if I could get to the south facing slopes of Glen Nevis I could run along the ridge to the Ben. Above the ridge was a thin line of caps suggesting strong lift. My first attempt to get there was a failure and soon saw a tactical retreat to my last thermal. Eventually, higher than before ..I tried again.

Confident of making it this time I had the chance to take the previous snap looking south down Loch Treig towards Rannoch Moor.

Once over Glen Nevis the slopes were producing good thermals as I had hoped so I followed the ridge west. The views were amazing. Looking first west to Loch Eil and south down Loch Linnhe with Mull in the distance.

The goal now within grasp.

Over the summit and one of my ambitions achieved. There must have been at least a hundred people there, now looking up instead of down.

Literally all downhill from here then, it’s time to get back. The way home looked much further than the view on the outward leg but I knew where the lift was likely to be and made right for it.  Keen to get home I concentrated on being faster (so no pics) with the intention of setting up a final glide for Feshie. Cruising in past Newtonmore and Kingussie my intention was to land when I got there, however, the thermal at the Bears Paw was still working and, well, I couldn’t resist it. Back at 5500ft. What to do now?

The best looking clouds of the day lay to the north of Loch Morlich and then east of Nethy Bridge so LET’S GO TO TOMINTOUL! was the answer. Beyond the loch I got the best climb of the flight to a cloud base of 7800ft QNE. After that, I got by with the odd top up to turn the village and set up a final glide home. I remembered about my camera just in time to get a pic of the final few km to Feshie past Loch Morlich and Rothiemurchas.

So to sum up, 223km, a trip to Lochaber, THE BEN and Tomintoul to boot. Do I feel lucky then?

Here is the ICG trace of his flight 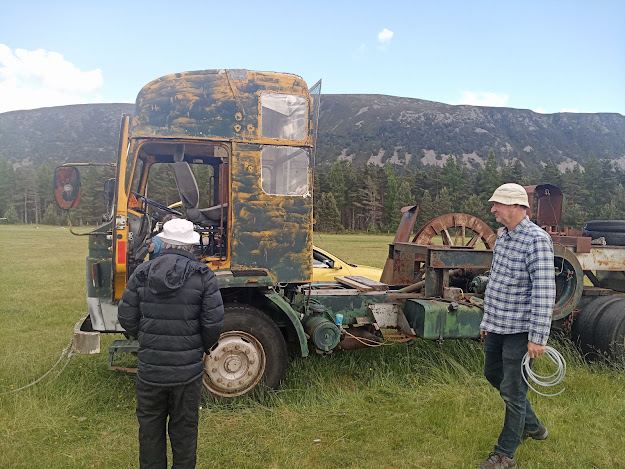