The first weekend of August!

Slowly life is returning to our new normal.
Stewart Hills summarised the weekend, "Over the weekend we managed in total 20 Launches (19 Aero and 1 Winch).  Lots of members getting checked out and some re-soloing.  IC and I shared the tugging on Saturday and I hogged it on Sunday!  All in all, a great weekend.  Thanks to the instructors for getting as many folk airborne and the many hands helping on the field."
Here are some of the photos he took on his flight: 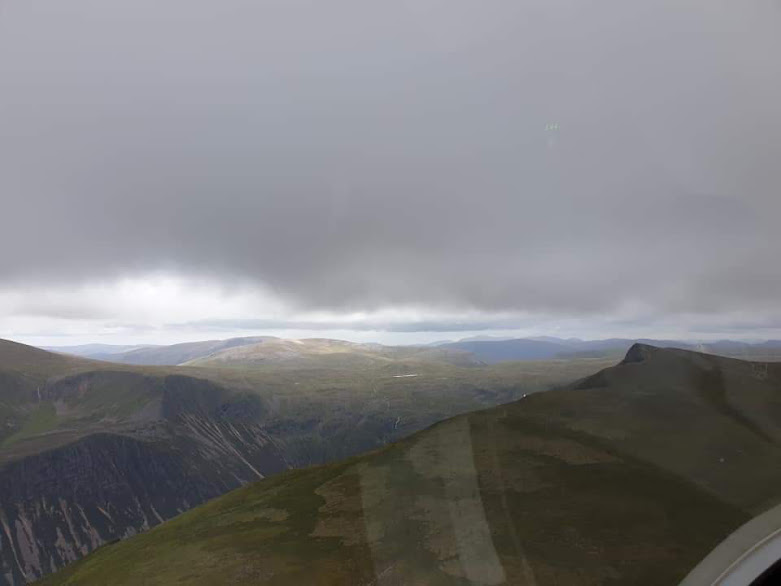 Tony Creswell reports in more depth about the weekend here, "members present for Saturdays flying and my best recollection was that everyone flew at least once during the course of the day.   Never a sunny day but a modest SW breeze was good enough for hill soaring although very few broke the modest height of 3k above the airfield.   Just a few mentions; the predictable exception being Nick N who with Ray I on board, went off radar down the Lairig Ghru somewhere...... Ray's after-match comments mentioned looking 'up' at the hill walkers on the hills alongside them (Eek).  Dave W had the longest flight of over 2 hours which in his words was meat and drink conditions for his Skylark, he and his craft had a splendid time.  Stewart H was rarely to be dragged out of the tug so Roger F gave up and took a flight in the Astir instead.   All were under the watchful eyes of Mike M who (bravely) went aloft with the author of this report who's last previous flight was mid-October '19. James C got back to re-solo so he had to be pleased, in fact, I believe everyone was rather pleased - a good day!
Sunday dawned rather grey and with a 'mizzle' about so I didn't race back down to Feshie for an early start, indeed arriving just as the first launch was set to go at around midday - numbers present down a couple perhaps for the day's activities when in fact the cloud cover was easing as the day went on and the slope lift was better up on the hill as well.   Nick N dragged Stephen S away from his soldering iron for another radar free excursion deep amongst the Cairngorms otherwise I believe the rest of us pottered around in the bowl and nearby.   Good to see Mr and Mrs Hawkins together up on high again. 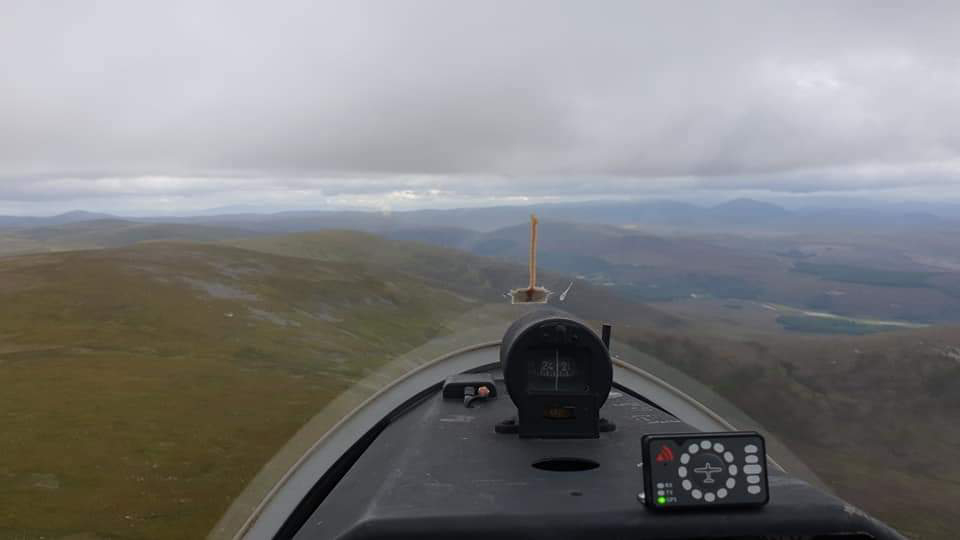 Stewart Hills photo from the hill
Fiona reports from her weekend at the club, "We started planning Sundays flight on Monday 27th July as the club's new website went live. DaisyETA (PH&FH) was the listing for 2nd August. 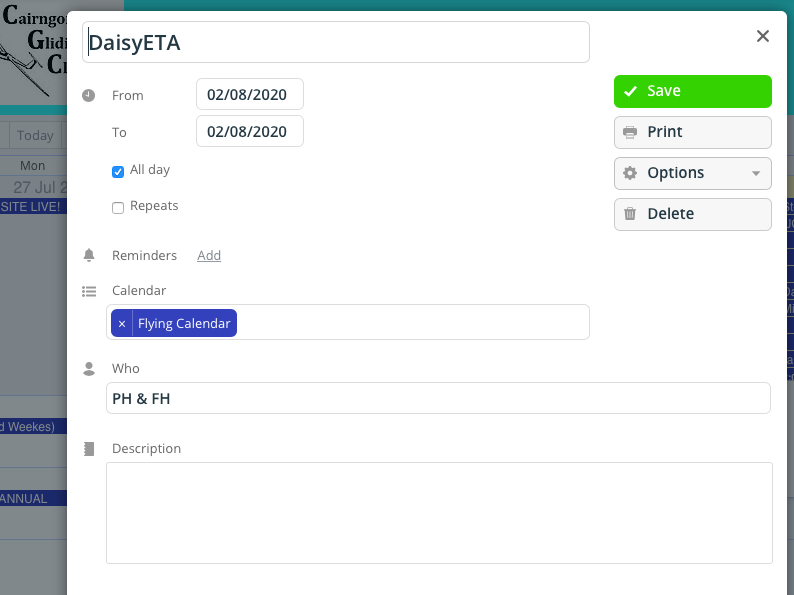 Almost immediately PH received an email from PM asking if he could fly a friend afterwards, all was agreed and we were set to go.
Next step was to place a good weather order by PH ... wasn't very effective on this occasion as we encountered some wet bits above the ridge!
No matter we waffled around at cloud base for an hour and forty-five minutes enjoying the shading created by the clouds and the wishy-washy sunshine that was available!
We didn't get any pictures today as the light was not considered good enough. Shame really as I could have been ready, had the camera been out of its case, to snap NN as he buzzed us showing off the bendy-ness of his terribly long and wobbly wings! 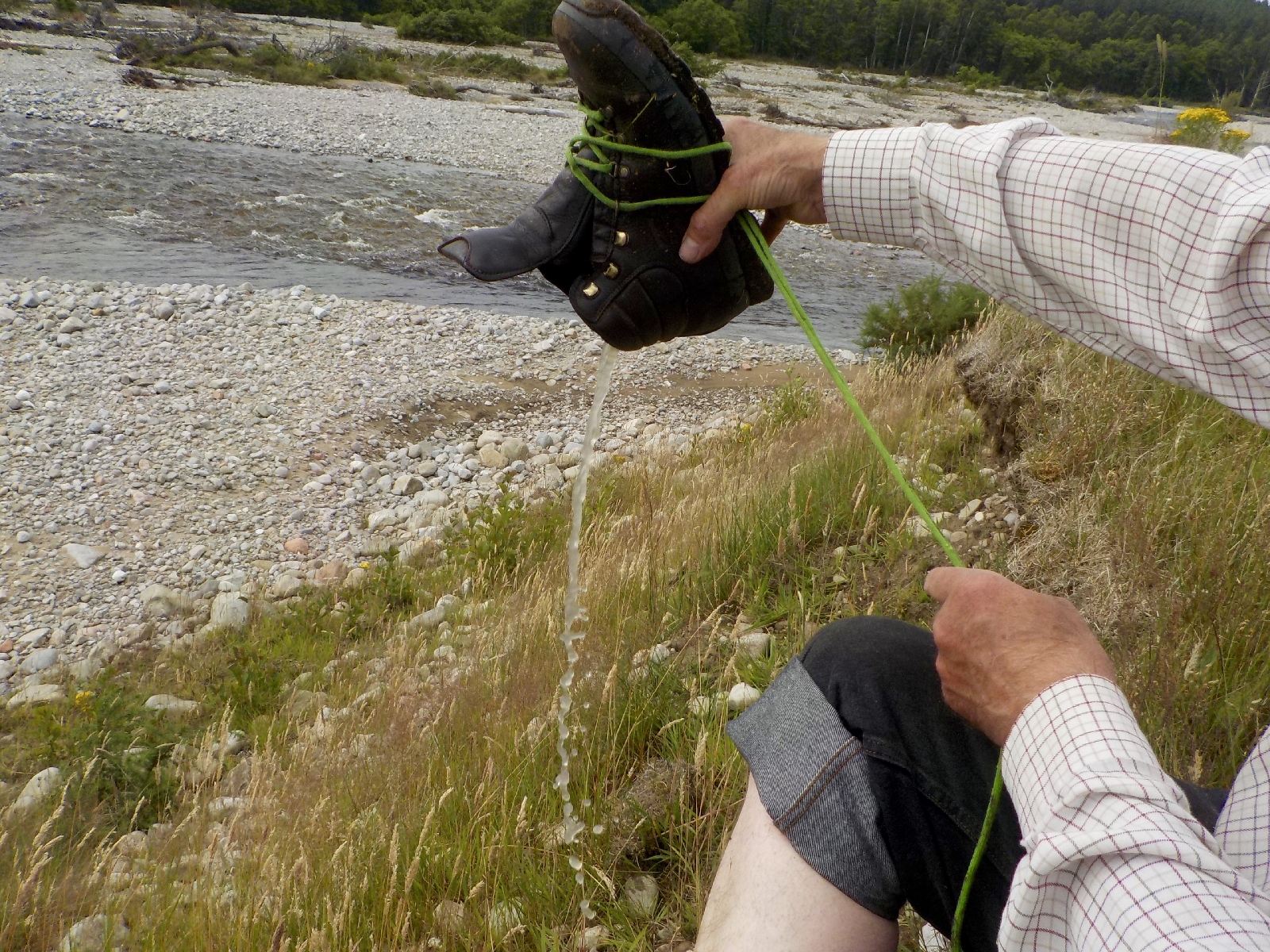 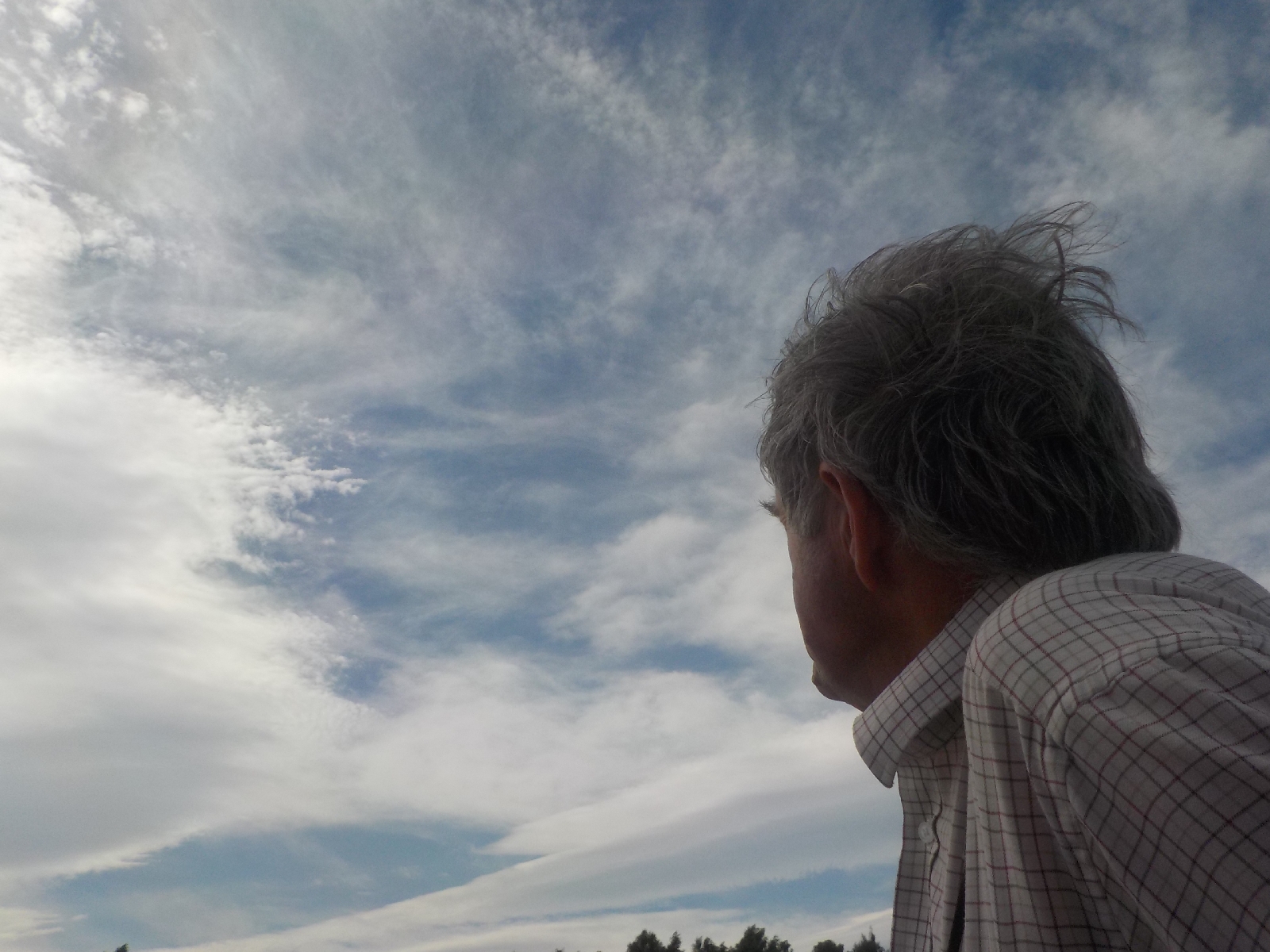 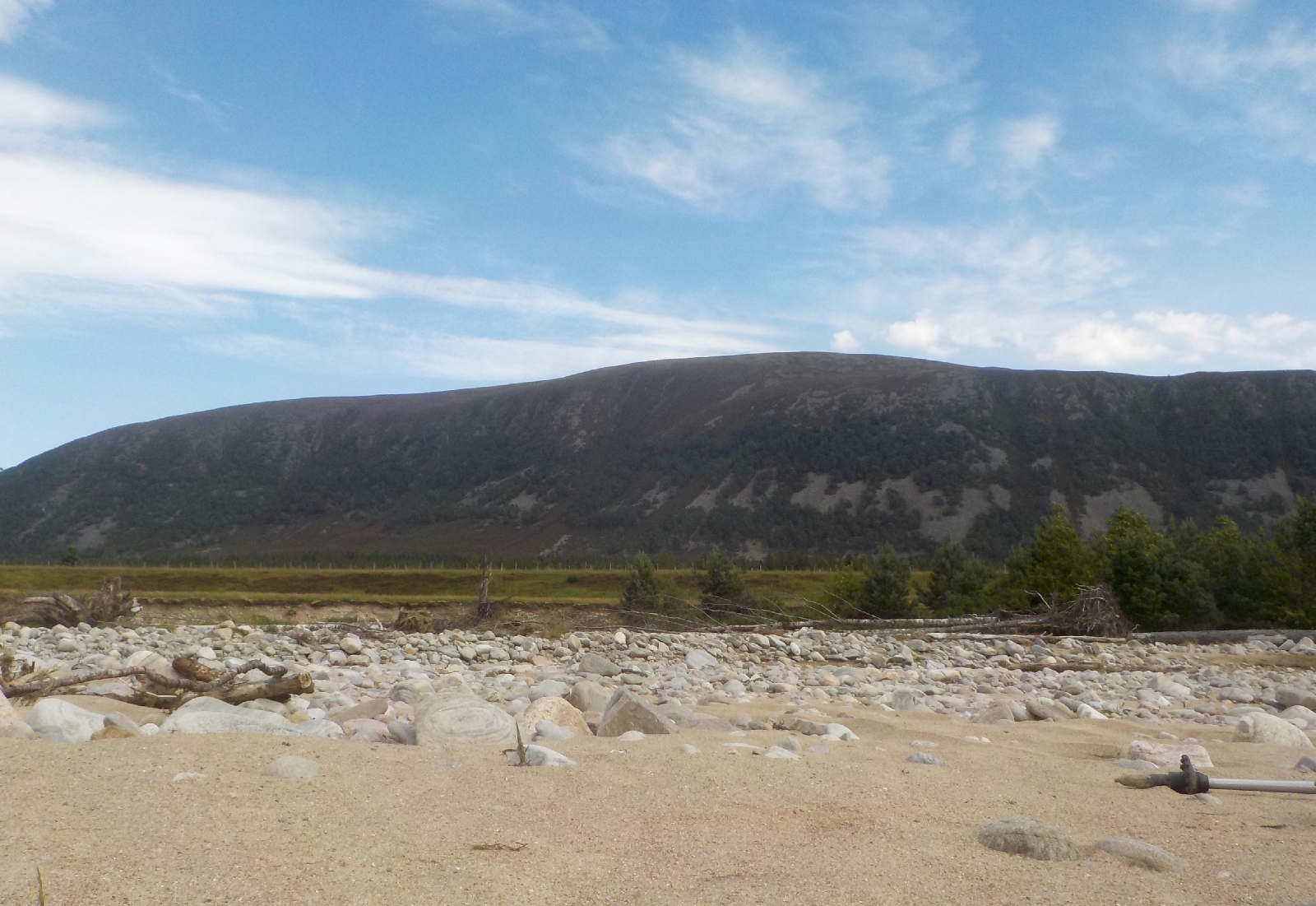 Lovely flight looking down at the riverbed that we used for a picnic on a very private beach on Friday. The clouds were phenomenal then and boots very soggy after paddling!
As we move back into the realm of two-seater flying, Stephen Struthers jumped in the back of the Ash with Nick. Here's what he has to say, " I was at the club on Sunday to continue work on the Cirrus but I managed to bag the rear seat in Nick's Ash 25 for a short but interesting from my perspective flight around the local mountains. Soaring  Carn na Criche and Braeriach below summit height a new and interesting experience for me. Nick then headed to Ben Macdui via the Lairig Ghru and proceeded to climb a small hole in the cloud getting to 5500 ASL before deciding cloud climbs with cloud base close to mountain tops wouldn't be the best plan. Rapid descent following the line of Lairig Ghru towards the west saw us over the ski centre in short order." 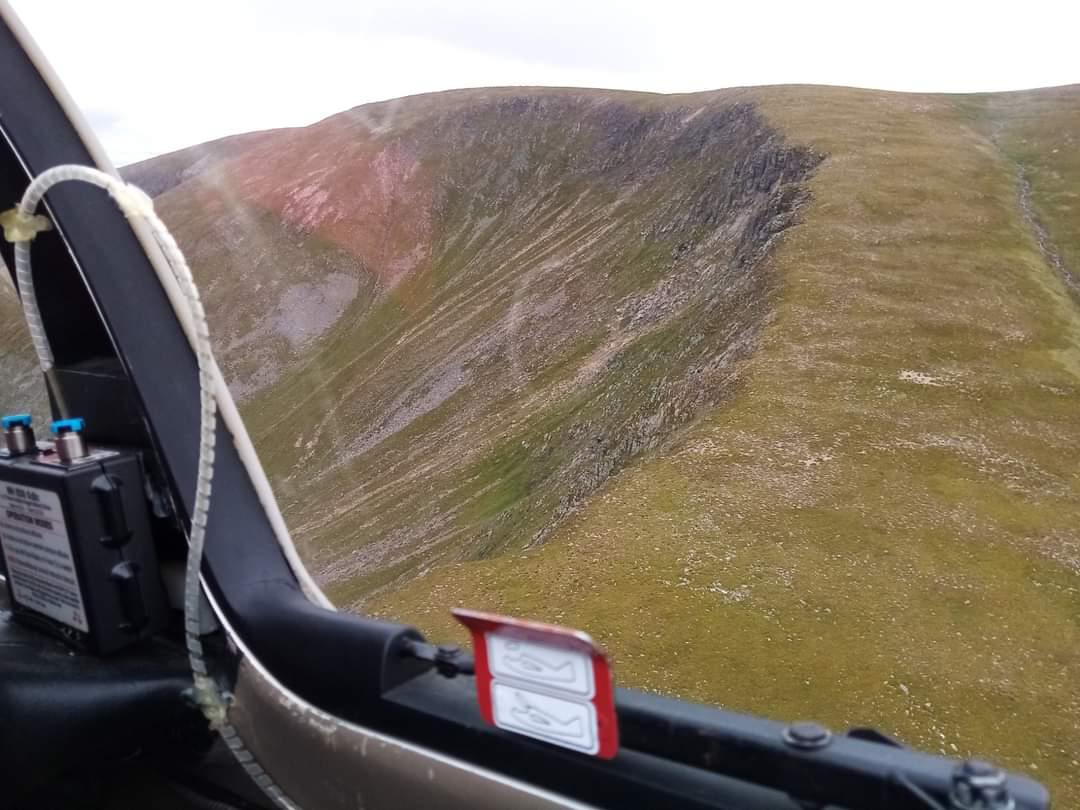 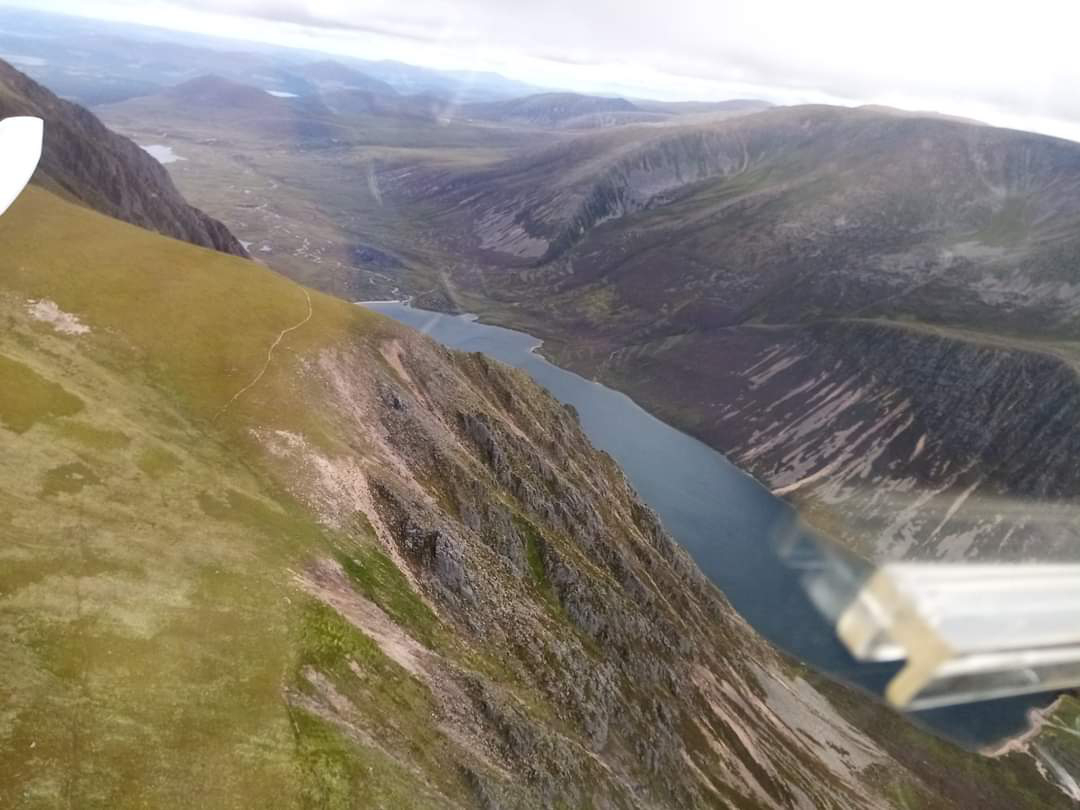 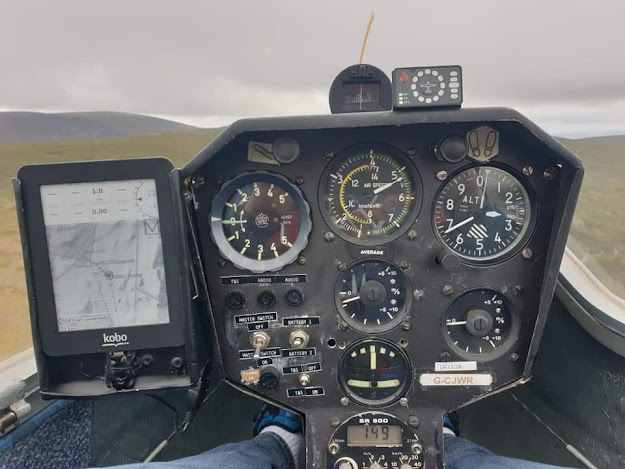 Tony Cresswell continues, "Given the Robin's Annual commencement next weekend this appears to have stirred Mr Winch into action to have an alternative means available for flights, so John W ably assisted by Dave B and Lee dragged the winch out for a late dib at winching. So the field was readied for this means with PK placed as the partaking aircraft, with self, TC at the launch point and Stewart H waving a table-tennis bat around.   Paul M rightly insisted that he ought to take the first flight solo to test the system as such so once there was enough energy established in the launch (posh talk for a long ground run) John W hauled him aloft for a decent result; Paul was able to rotate into a good rate of climb and released at what appeared to be around 1,000' and the cable was drawn in capably within the airfield."
So with the last flight of the day on Sunday with Paul Myers testing out the Winch and the Robin having its annual next weekend, it was a successful weekend with only a bit of smoke!! The gliding club was busy at the weekend, hopefully, the summer will last a bit longer!