Presumably, on loan from Slingsby, BGA 1063 was first flown by HCN (Nick) Goodhart, on 1st September 1962.  It was then prepared for the February 1963 World Championships and shipped to Junin in Argentina where it was allocated competition number 31.  The Skylark 4’s were outclassed by more progressive designs and Nick Goodhart and 1063 came 11th. 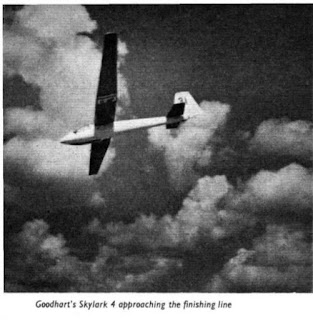 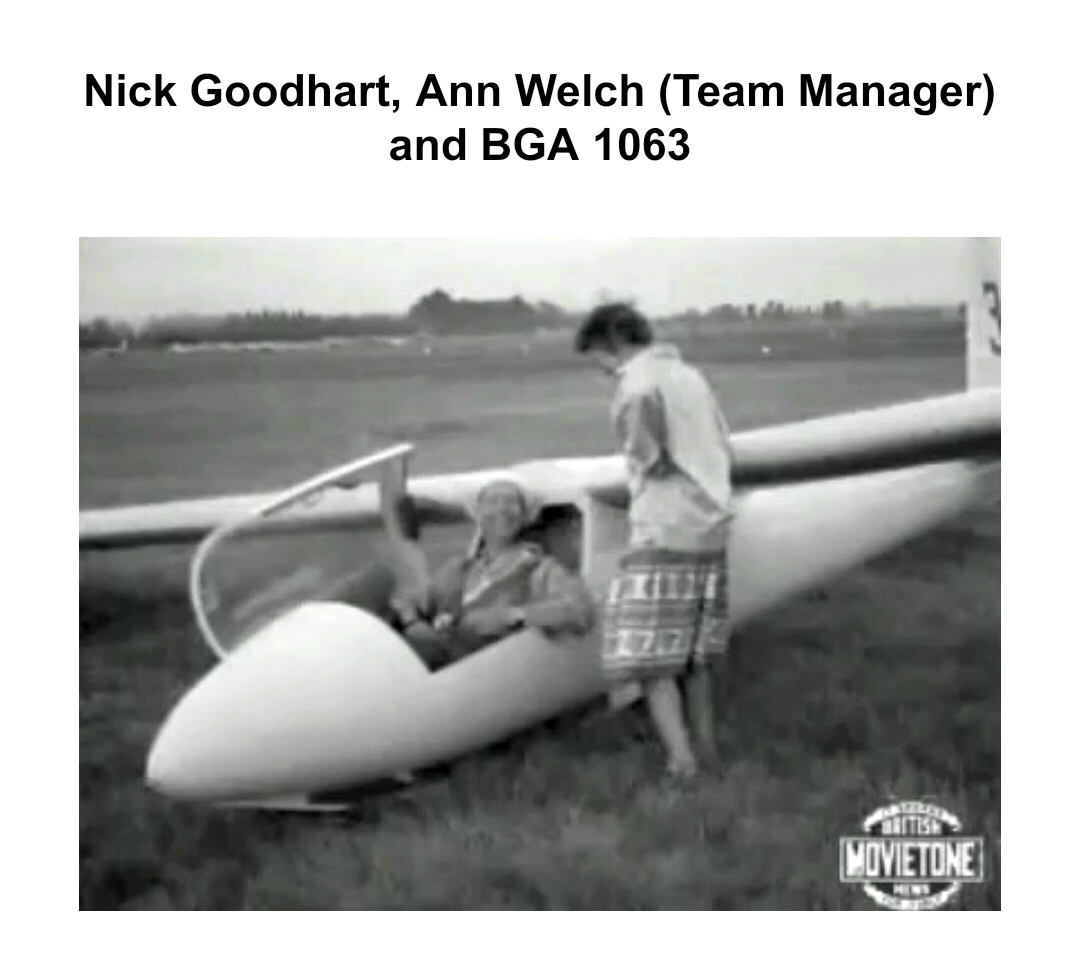 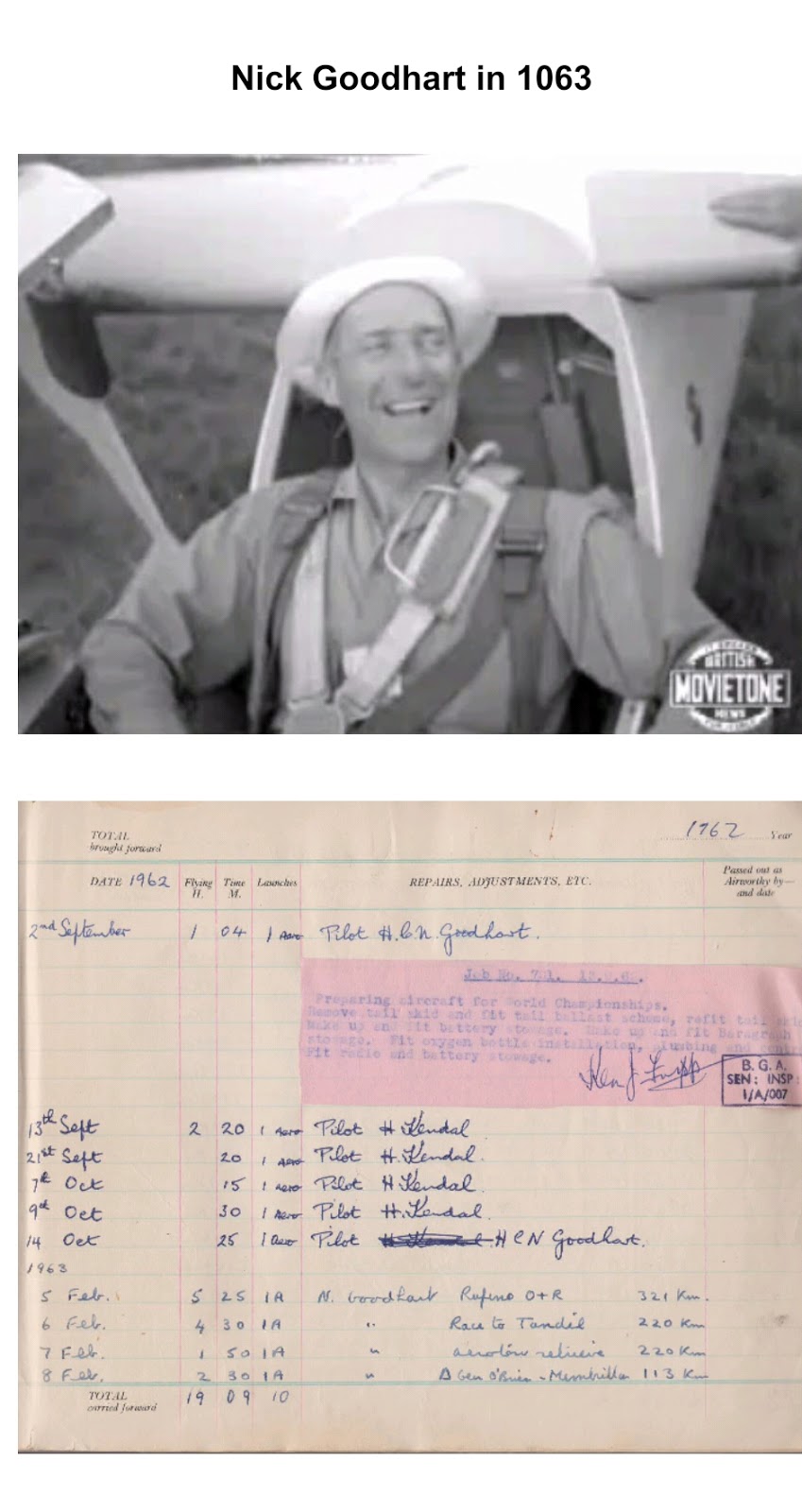 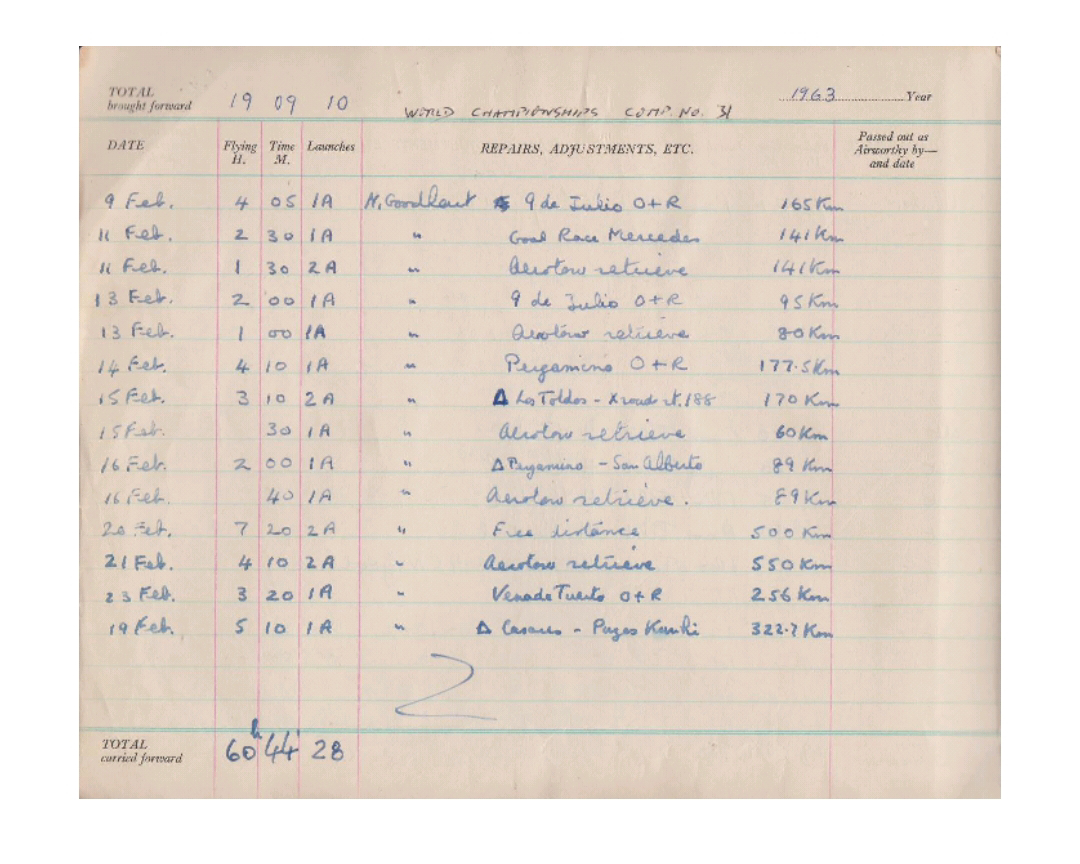 Note the 550 km aerotow retrieve – those guys were tough!

1063 was returned to the UK and purchased by the Polish Air Force Association (PAFA) Gliding Club.  The PAFA comprised Polish personnel who had served with the RAF and who had been unable to return to Poland after 1945.  The PAFA GC formed one of the original components of the Lasham Gliding Centre.

BGA 1063 was allocated competition number 303 to commemorate the Free Polish 303 RAF Fighter Squadron, claimed to be the most successful squadron in the Battle of Britain.  303 was flown by Ted Jerzycki in the 1963 and 1964 UK Nationals.  A photo of him in the Skylark appeared in the August 1963 S&G. 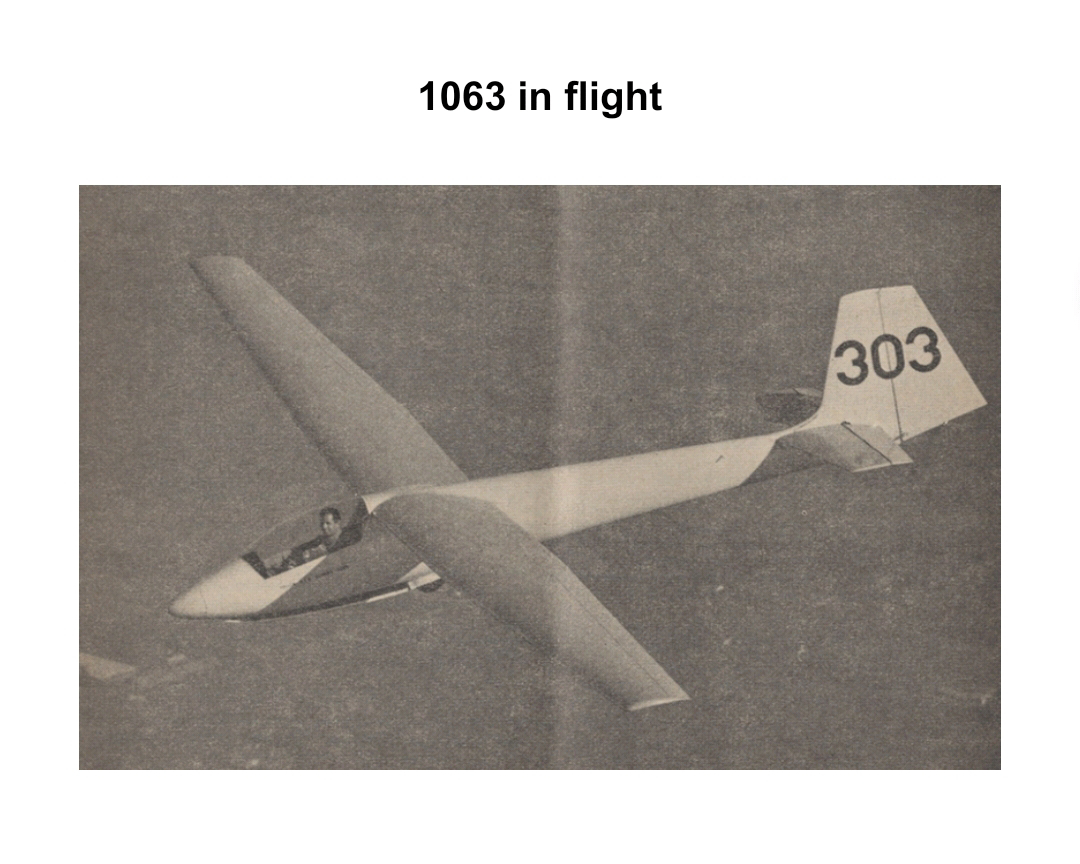 According to a later member of the PAFA GC, 1063 had the 303 squadron Kosciuszko emblem (see below) on the nose together with small Polish Air Force markings.  The Pirat which replaced 1063 had the same marks. 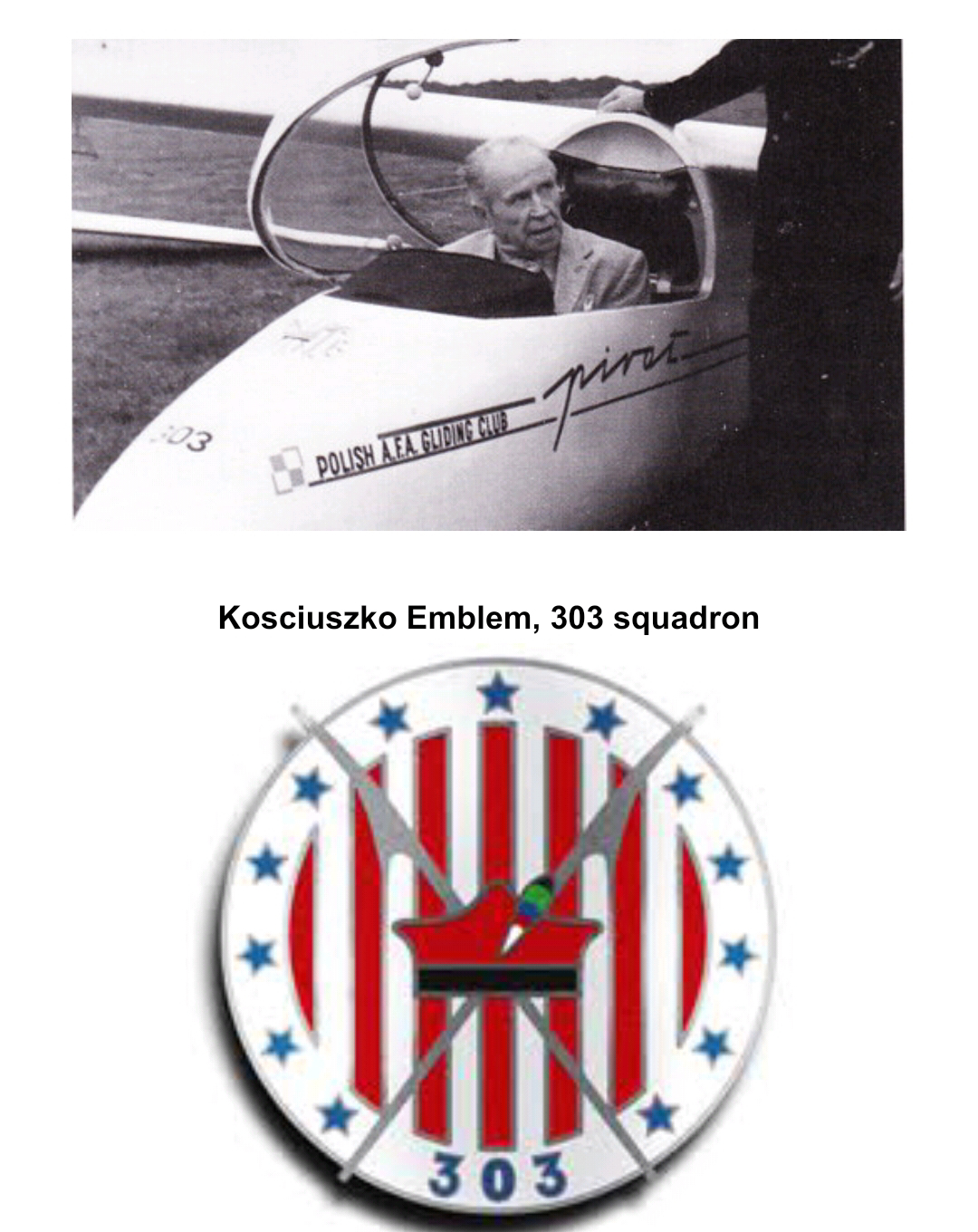 1063 was purchased by Dorset Gliding Club in 1974 and flown for many years from Tarrant Rushton airfield and later Old Sarum. The glider was repainted completely in white in 1977 and carried the competition number “76”.  At some unrecorded point at old Sarum, the glider acquired red wingtips and a red stripe on the nose. It survived a serious accident in 1983, being repaired by Ken Fripp.  The following description came from Dennis Neal of Dorset GC.

This rather sad ending came at Old Sarum. A highly experienced instructor on finals turned away in phantom lift from a known curl-over problem area at about 300' and ended up cartwheeling and sliding down the roof of a rifle butts shed and this was the end result.

We had to saw through the skid to remove the nose to get at the pilot who had badly broken legs but was fully conscious. He had to remain hanging in the straps until the rescue services arrived. He lost his instructor rating but continued to fly for several years.

The glider was soon back in service. Tough old bird the Skylark! 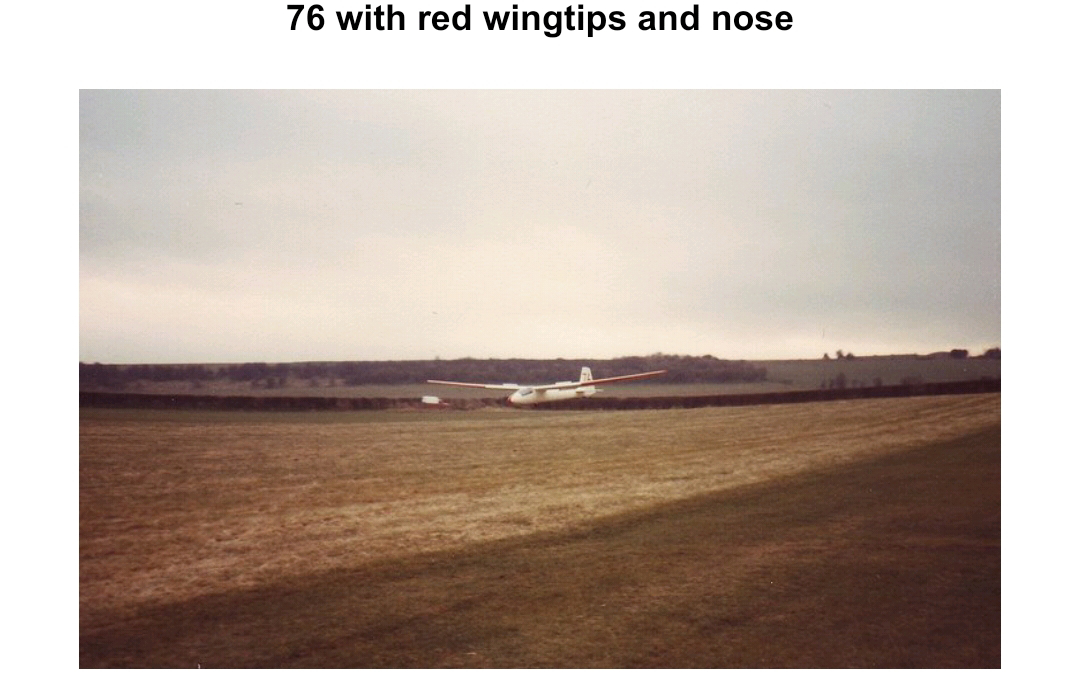 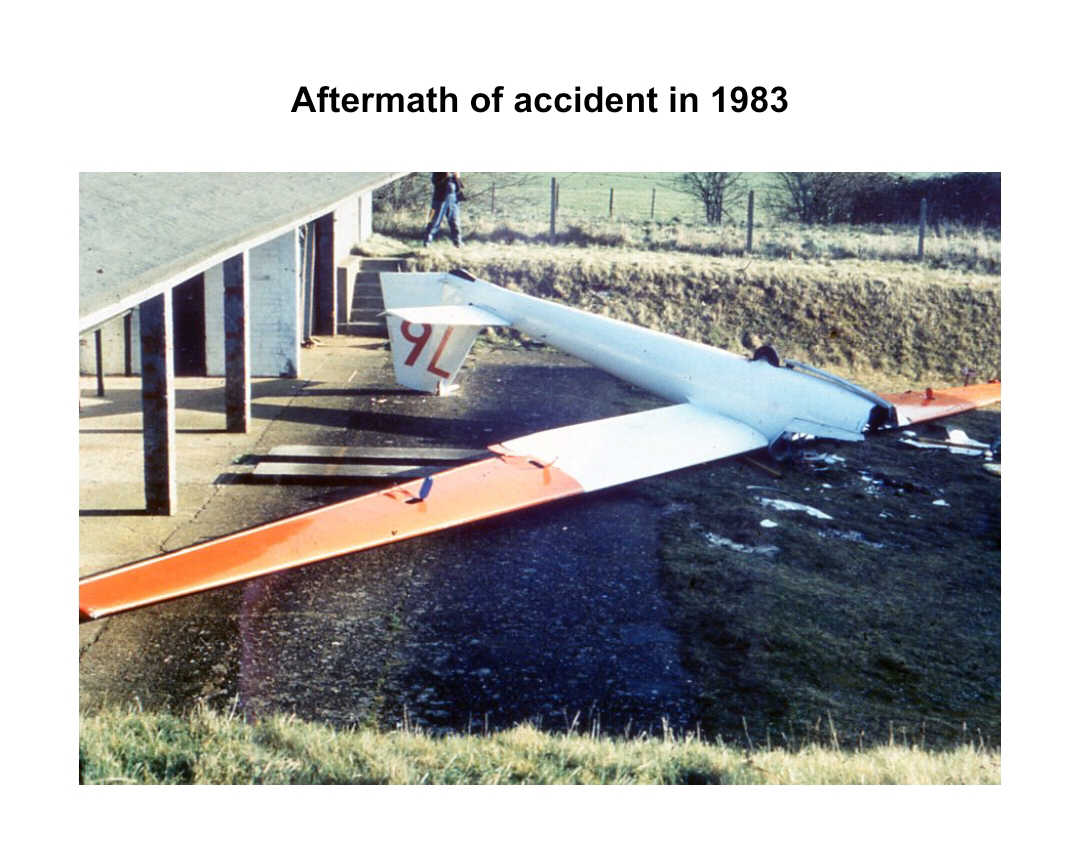 The next registered owners were P Bartlett, P Fritchie and P Horn who appear to have acquired 1063 in July 1987.  At some point between 1987 and 2000, BGA 1063 acquired its BGA trigraph BLW and a small red hedgehog (the Aquila Gliding Club badge) on the nose.

In 2000, BLW was purchased by Steve Trusler and Paul Morrison of Oxford Gliding Club from Andrew Preston.  It was then residing in a barn near Hinton in the Hedges, the home of Aquila GC.  Their first flights were carried out in the snow at Weston on the Green in December 2000. 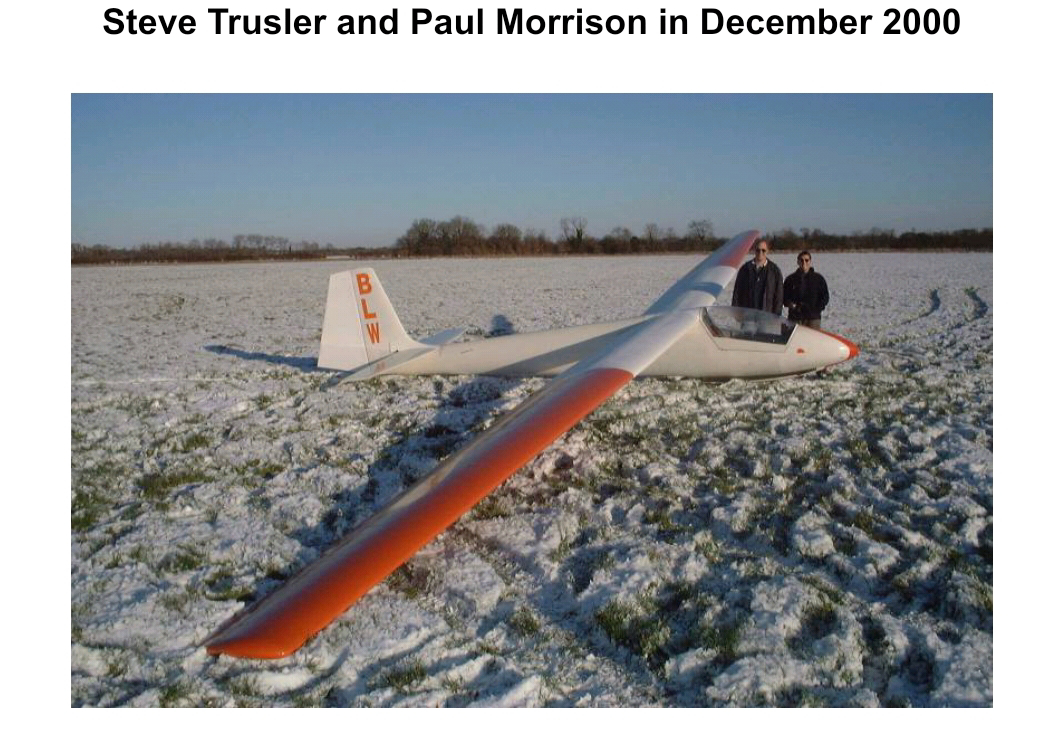 Paul contacted Nick Goodhart to ask him about 1063.  Nick’s slightly grumpy reply was along the lines of “it didn’t do me any good”. Goodhart hated to lose, but the Skylark 4’s were outclassed by more advanced designs in 1963 (and he did worst of the Skylark 4’s entered). 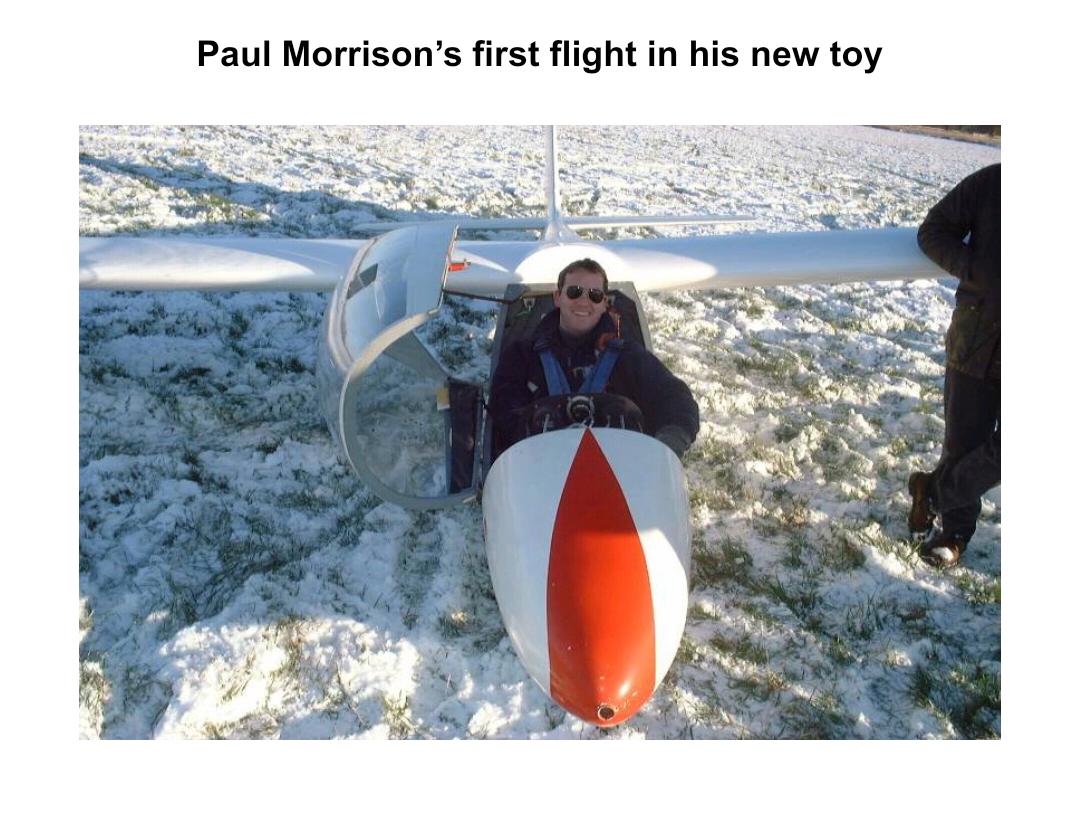 Paul and Steve did a lot of flying in BLW and Steve took it to the 2002 International Vintage Glider Rally at Achmer in Germany. 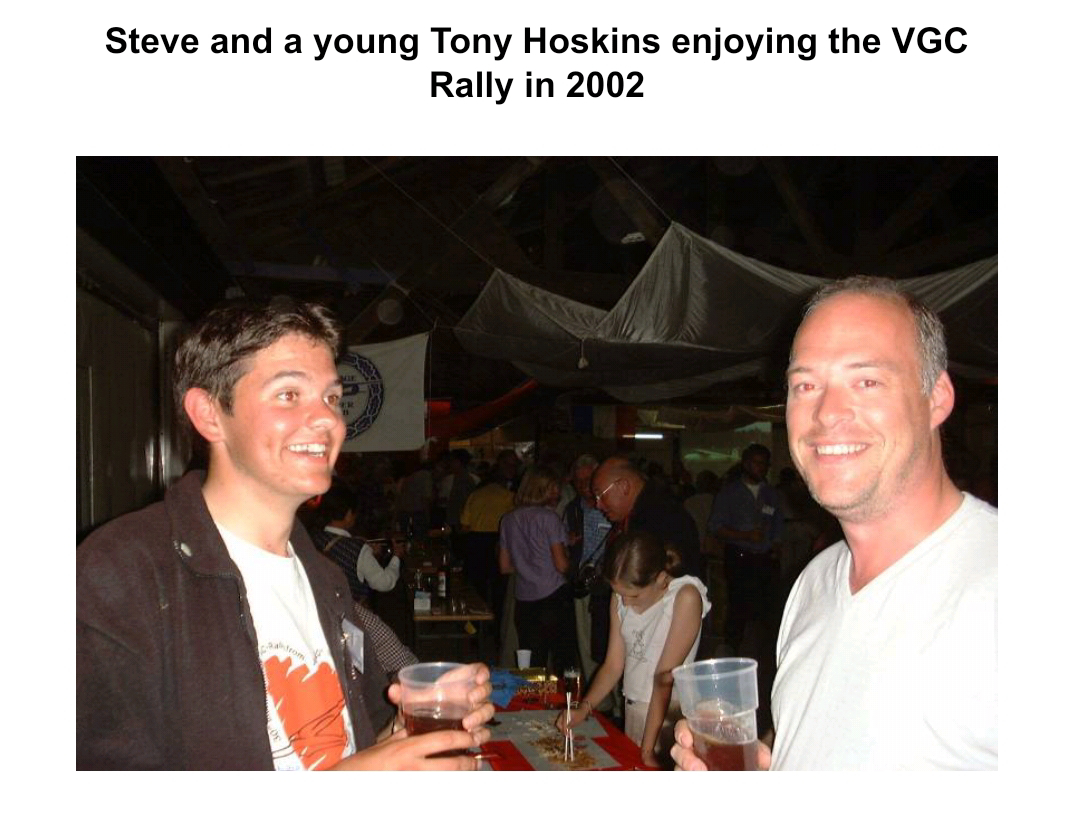 In 2004 Steve and Paul, assisted by Tony Hoskins, did a lot of work to restore 1063 to its original colours. (It was later established that originally the entire wing was blue and not just the wingtips). Tony subsequently qualified as an aircraft engineer and founded South East Aircraft Services. 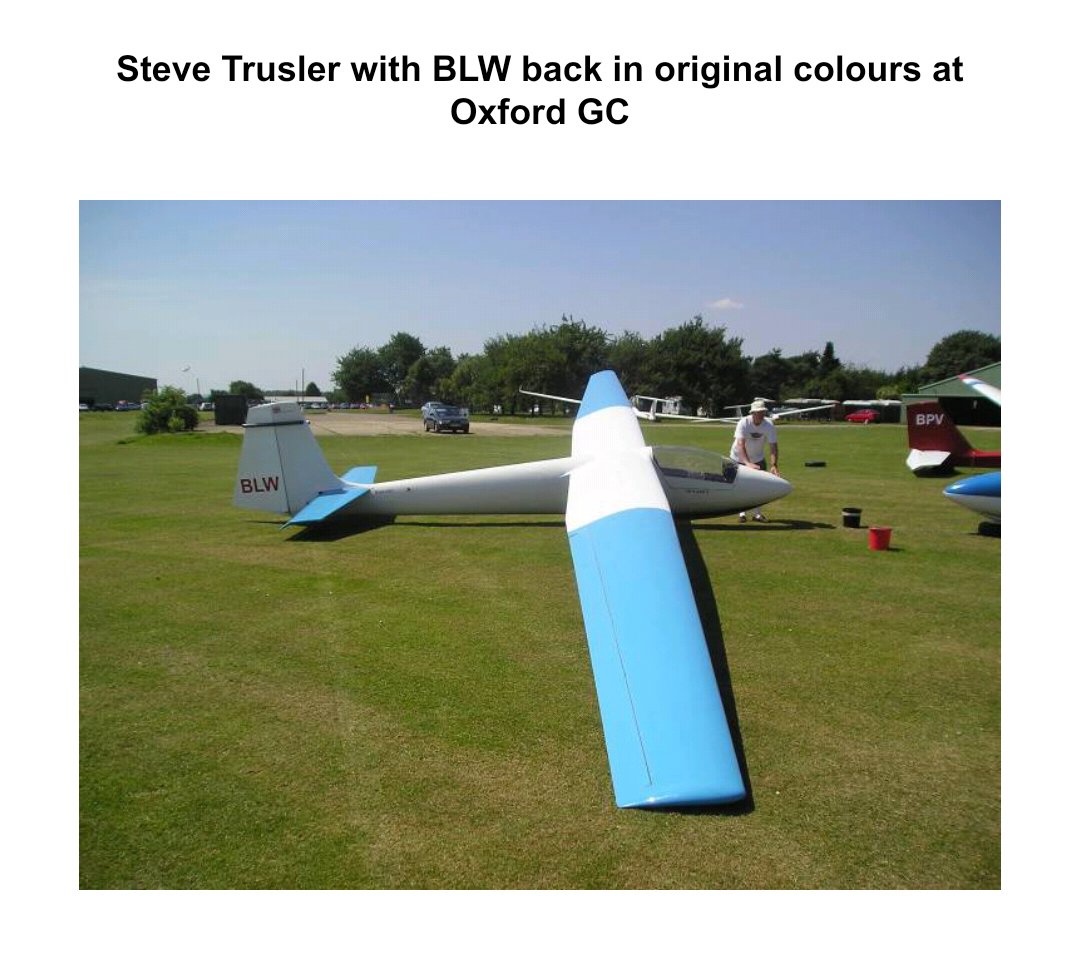 Paul Morrison sold his share to Steve in 2007 as he had moved on to glass gliders.  Steve’s gliding career wound down and he last flew BLW in 2009.  The glider was without a CofA in 2010. 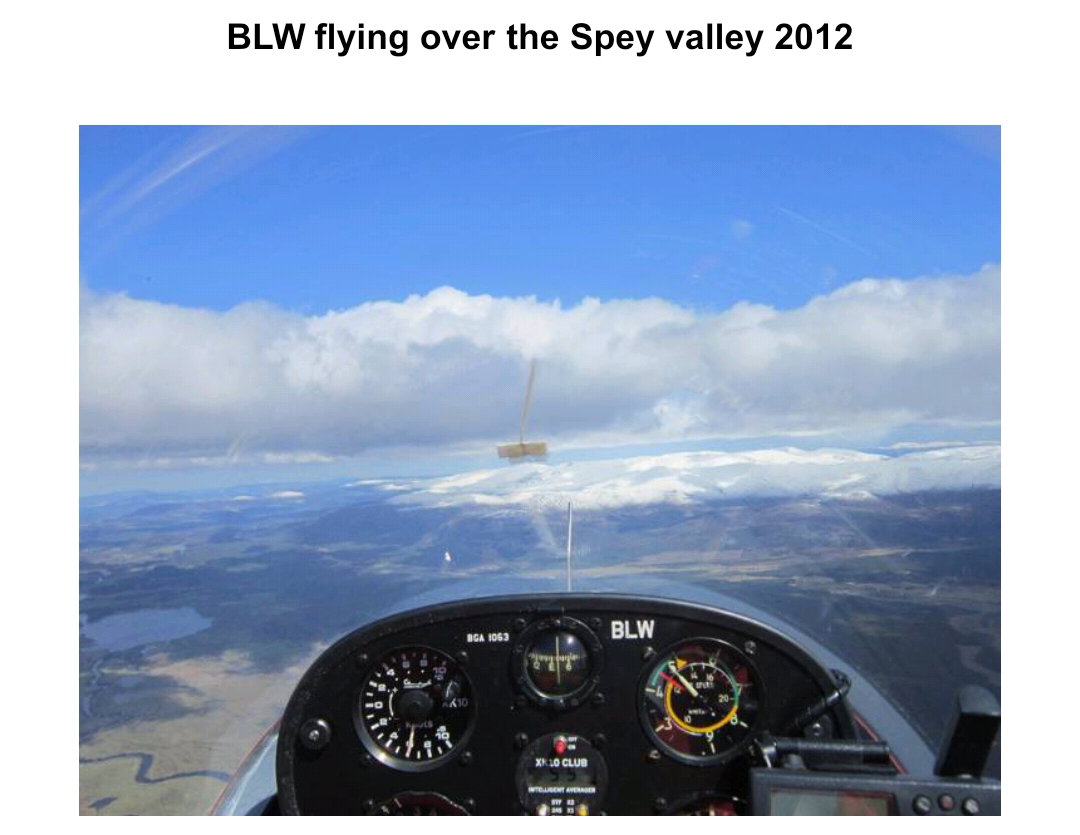 In 2011 I purchased BLW as I had relocated from Weston to Feshiebridge.  The CofA was renewed in 2011. Part 1 written by Dave Weekes.

Stay tuned for part 2, to hear what Dave has been up to with BLW since he brought her to feshie and where he's taking her next!! 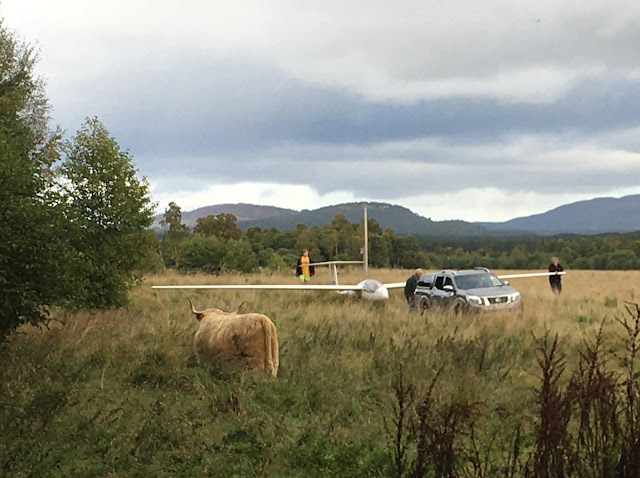